Talking about Modern and Ancient Peoples

Update: 11/21/11:  Just ran across this earlier blog post by PZ Meyers that uses the same metaphor, much earlier than my use.

I just finished reading John Hawks’s recent post discussing a new paper by Pontus Skoglund and Mattias Jakobsson, which examines the presence of Denisovan heritage in living peoples. I’m no geneticist, so I’m not offering any take on the bulk of the post, but I was struck by his final paragraph. In it, Hawks discusses how even a “small” drop of Denisovan DNA still translates into quite a big modern, genetic splash:

I should mention: less than one percent of a half billion people is still a very large number, added to five percent of the indigenous population of New Guinea and Australia, and smaller fractions of other island populations. The total amount of Denisovan legacy present in living people probably exceeds the population of Earth at the time the Denisovans lived.

As previously stated, I’m not a geneticist, but I do have quite a bit of experience trying to communicate ideas like this to college freshmen and sophomores. In the division of labor in the discipline, I’m on the front lines (don’t like that a military metaphor is the first that comes to mind) of attempting to make anthropological knowledge accessible to an audience that often begins at a point very far from where I’m trying to get them. One of the persistent problems I face is the continued appeal of essentialized understandings of human populations. Most of my students still seem to buy into the idea that there have been a small number of human groups that are clearly biologically distinct and that these distinctions have great antiquity. In this scenario, there have always been Africans, Europeans and Asians and it’s only in the past 500 years that any significant gene flow has taken place.

We know this is incorrect, but sometimes language gets in the way. The very names “Africans,” “Europeans,” “Asians,” and “Neanderthals” and “Denisovans” for that matter, contribute to my students continuing to think in terms of essentialized groups, rather than as populations with porous boundaries that constantly exhibit changing genetic variation. I realize that names like these are likely needed descriptive shorthands, but they do pose a problem for me in my introductory classes. My primary goal is not to train a new generation of anthropological geneticists, but instead to communicate a clearer and nuanced understanding of the biological relationships between different groups of humans across the globe. So, I’m always searching for “easy to think” metaphors that can convey the basic message of more complex research. 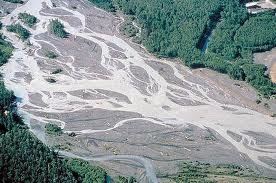 My thinking about this post was also shaped by Jason Antrosio’s “It’s Admixture All the Way Down” that covered very similar ideas. At the moment, one of the best metaphors I use in class is that of a “braided river” in which streams diverge and then recombine. In a 1994 paper, John H. Moore offers a view in line with the braided river idea:

that human history has always been characterized by interaction across profound ethnic and cultural boundaries, by the amalgamation of linguistic traits, and by the recurrent hybridization of cultures. Patterns of language, culture, and physical type were no simpler in the past than they are now [Moore 1994:937]


Getting back to the original quote about Denisovan legacies, just because the Denisovans aren’t “around” anymore, doesn’t mean they’re not “around.” An ancient population is present even though in a very different form. Using the braided river metaphor, the name Denisovan refers to the contents of a particular stream that mixed back into another stream, which grew larger, amplifying its original contents.